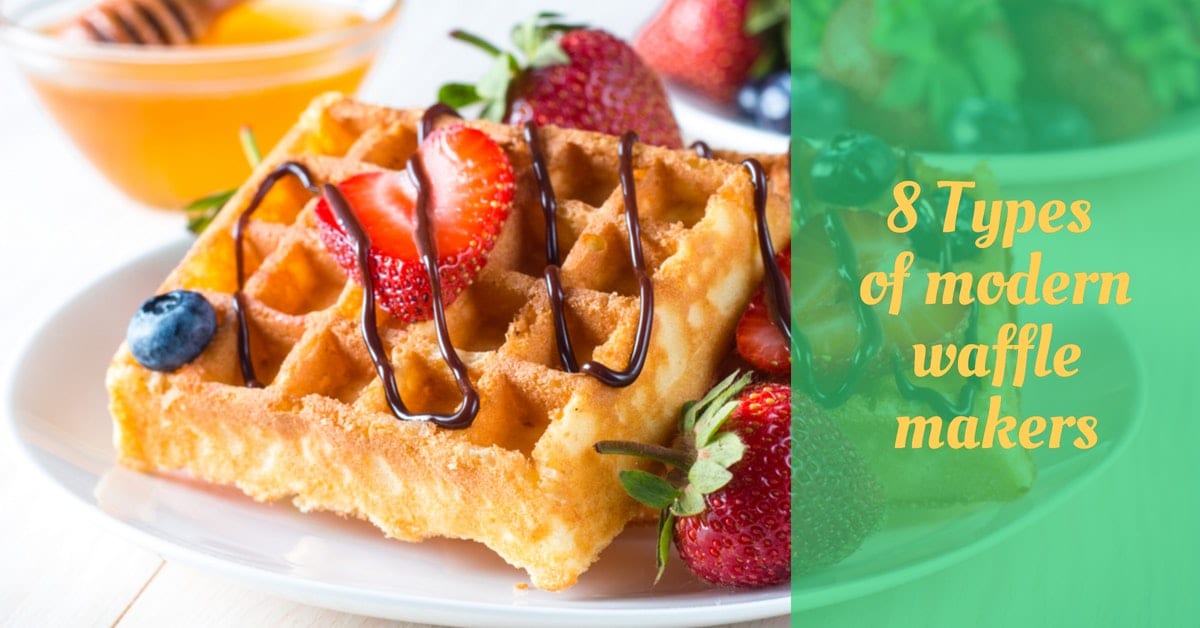 Waffle makers are the kind of kitchen equipment that can give you a lot of joy in the morning. Both adults and children will never refuse to eat waffles, especially since they can be of completely different types.

Many people think that waffles are a device of very narrow specialization and are designed exclusively for creating sweets. But you will be surprised – the cooks have already created many delightful recipes that can make you happy.

Ice cream, nourishing sandwiches, cakes, and even full cakes – the range of dishes is endless. We decided to tell you a little more about the kinds of waffle makers.

Are you a fan of sweet pastry? Then you may also need electric crepe makers to make a tasty breakfast. 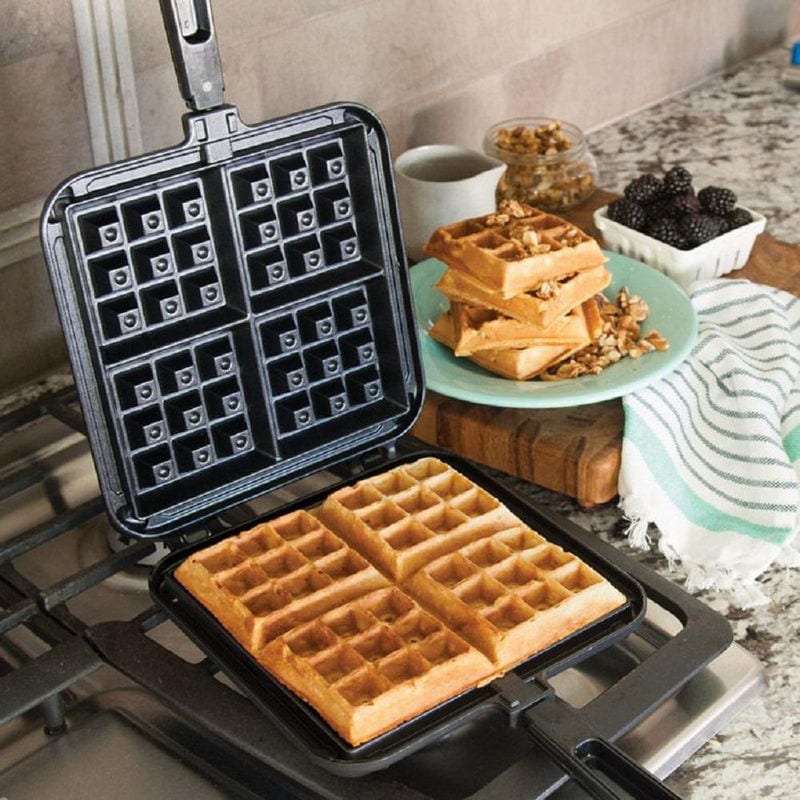 Usually, when a person is asked about waffles, he immediately remembers soft Belgian waffles. They are baked on the biscuit principle and the dough is mixed in a similar way.

In such a waffle maker you will get a crispy crust and soft, delicate dough as a result. Usually, the cooking surface is designed for 2-4 waffles at the same time.

They are most popular among people in both nourishing and sweet variants. In small holes, you may put a variety of filling – soft cream cheeses, berries, and even salted fish. Such waffles are perfect for people who are ready for experiments.

2. Waffle maker for round Belgian waffles 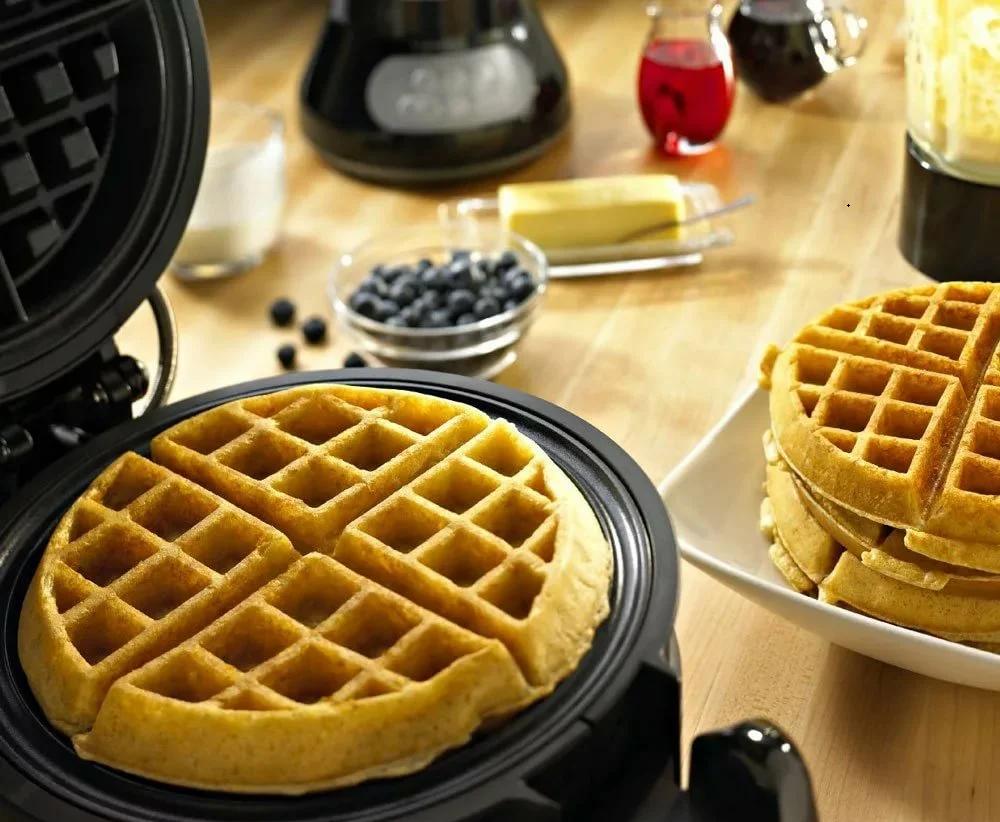 If the square version allows you to get several waffles at once, the round shape is more suitable for people who are not going to make a whole batch of waffles at once. Most often such waffles are designed for 1 portion, and the resulting soft baking is folded up in a stack.

This “pyramid” is served with honey, maple syrup or you can just put pieces of butter. In fact, this type of waffle maker is not much different from its “brother”, even the taste of the dough baked in two different units will be the same.

If you prefer pastries with filling, you may like ceramic bakeware sets. With them, you can make any cake or pie with your favorite filling. 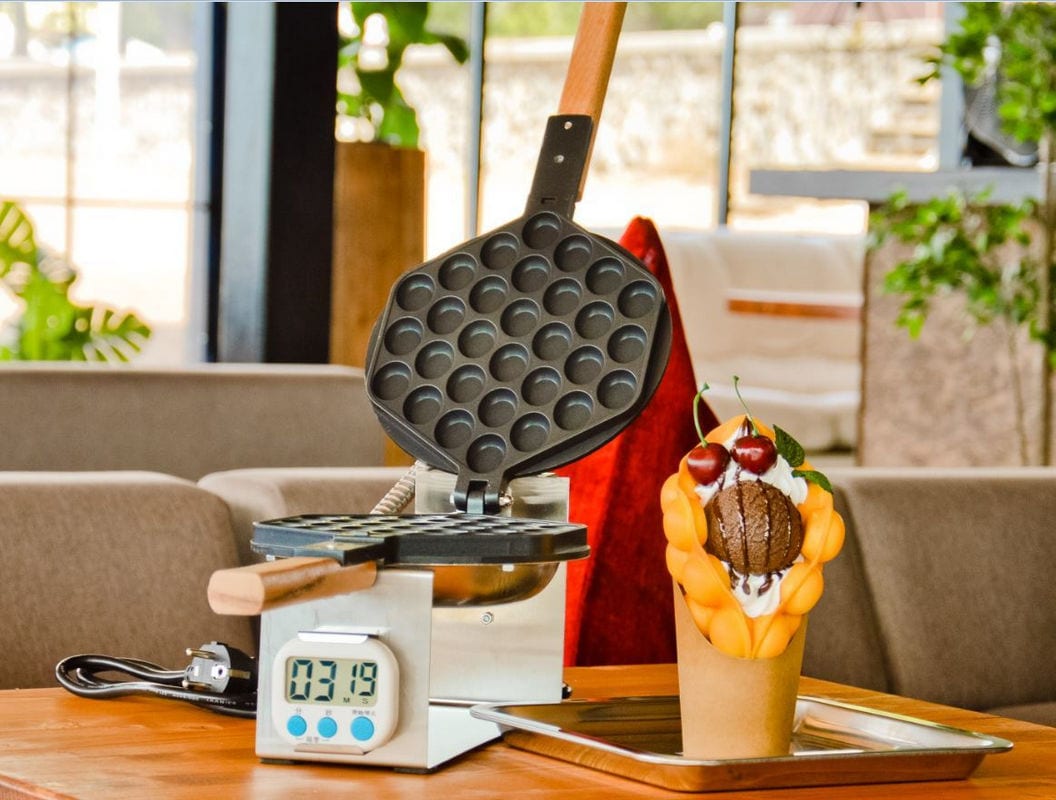 Such waffles are often called egg waffles, but they have acquired the name “Hong Kong” because of the huge popularity of such fast food in China. Bubble waffles can have a filling not only on themselves but also inside each “ball”.

Such waffles are easy to spin because for proper cooking the device must be turned immediately after the decomposition of the filling. Usually, they have a non-stick Teflon coating, which will need to be replaced over time.

However, if you are looking to use them at home, you will probably not encounter this problem. Regarding the ease of preparation, we can say that such a waffle maker can surprise you and your family only in appearance, the taste of waffles will be similar to the Belgian – soft and biscuit.

The main feature of such devices is the form of baking itself. Scandinavian waffles are usually made in the form of hearts, and also sometimes may look like cookies.

The coating of such waffles is non-stick, and the overall shape of the entire roasting surface – round. You can make up to 6 waffles at once, depending on the coating itself and its shape.

Such waffles are served as a separate dish or dessert, and in more nourishing versions may have vegetables in the composition. 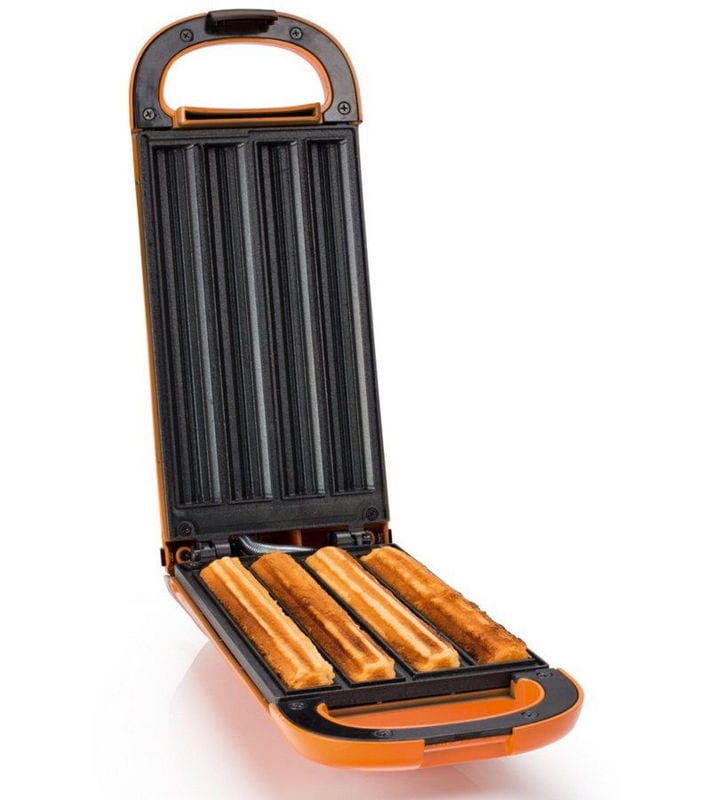 Churros is a Spanish sweets dessert made from custard and deep-fried. This dessert is incredibly delicious, yet calorie and fat. In order to make it a little more healthy, the producers have found a way out with the waffle makers.

Churros is baked in it from a standard dough, to which the Spanish are used. The difference in cooking is that you don’t deep-fry the dessert, but bake it on a non-stick surface. The result is a wonderful dessert that will be a little healthier than the classic churros version. 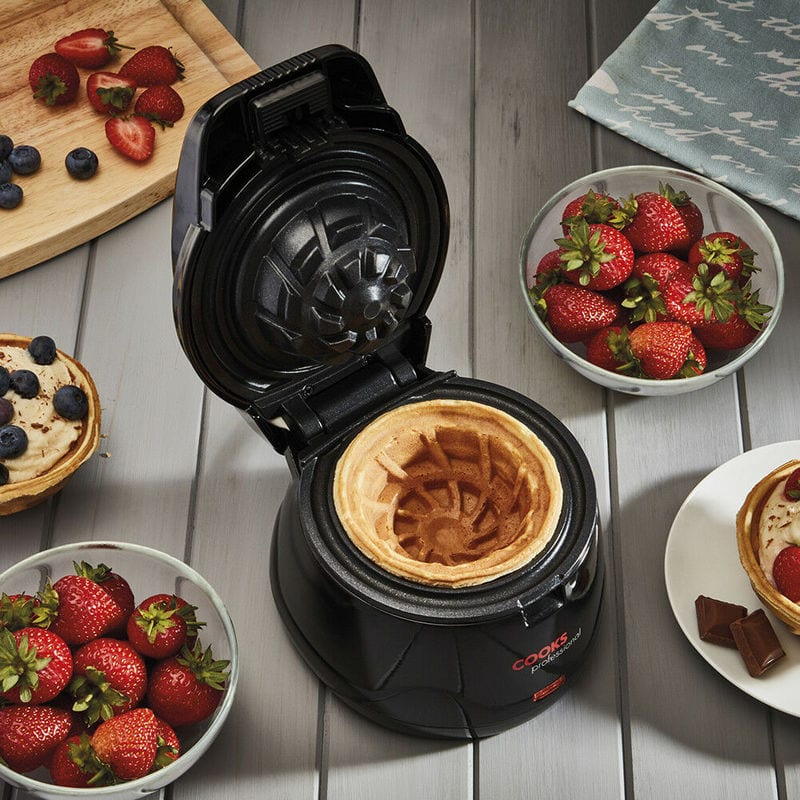 We all know what tartlets are. These cookie dough forms can be both sweet and more neutral – in any case, you will fill the dough boat with filling. In order not to buy ready-made dough forms in a shop or bake them in your own oven, you can very quickly make a blank for snacks in a waffle maker.

Usually, special waffle makers are made for tartlets and they are rarely found in a regular shop. But if you are passionate about making snacks, it is a great way to save time. 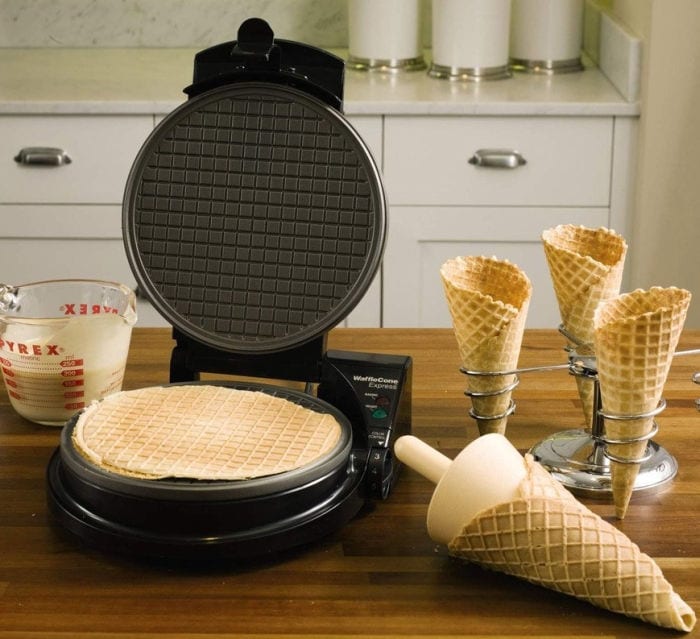 American waffles are commonly referred to as thin and crispy waffles. They have very small notches, which are designed more for decoration. These waffles are often made into ice cream forms, and the tubes are filled with cream or another filling.

The distinctive feature of these waffles is that both roasting surfaces seem to “flatten” the dough, making the baking very thin and crisp. By the way, in terms of cooking time, these are the fastest waffles that you can make yourself. 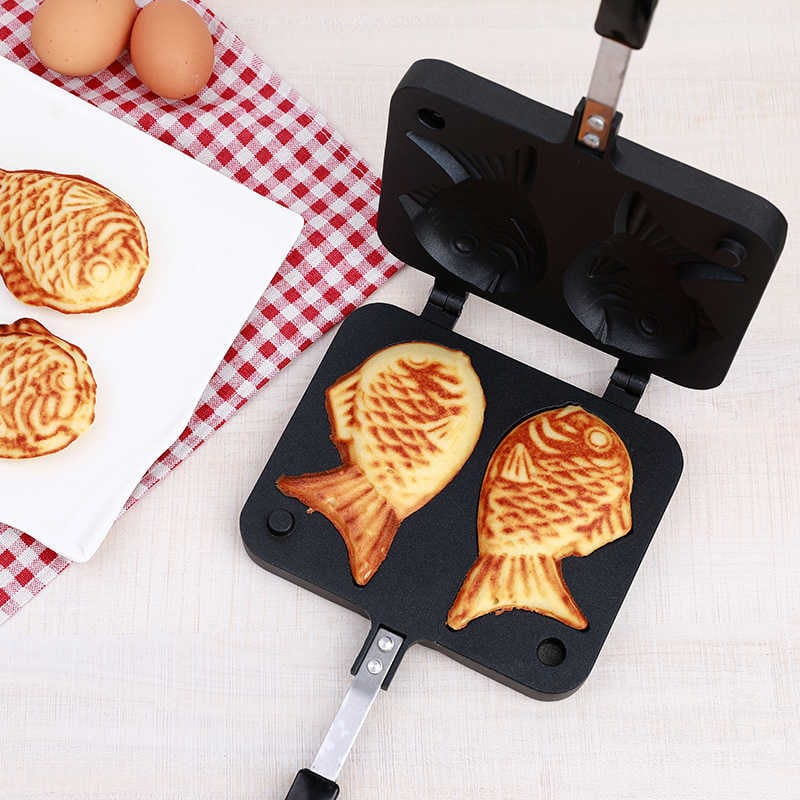 Waffle makers of this type can have different forms of roasting surfaces. Some are oblong and designed for baking corn dogs, some are shaped like different animals.

The main feature is that the shapes are deep enough and the waffles themselves must have some kind of filling. They are called cakes because of the soft biscuit dough that comes from baking. If you want to delight your family with nourishing dishes or surprise children with baked fish, we recommend this option.

Pancake makers also have a similar design and operating system. They will help you diversify your breakfast and make your whole family happy.

Of course, every day there are more and more different surface options for baking. They have different shapes, can work with different dough and ingredients.

We have found for you the most common options, which you can often find in cafes and restaurants, as well as in consumer electronics stores. If you really like to eat waffles, the best option is to buy a home waffle maker and make them yourself. You will find a huge number of recipes on the Internet, and different surfaces will help you bake completely different dishes.