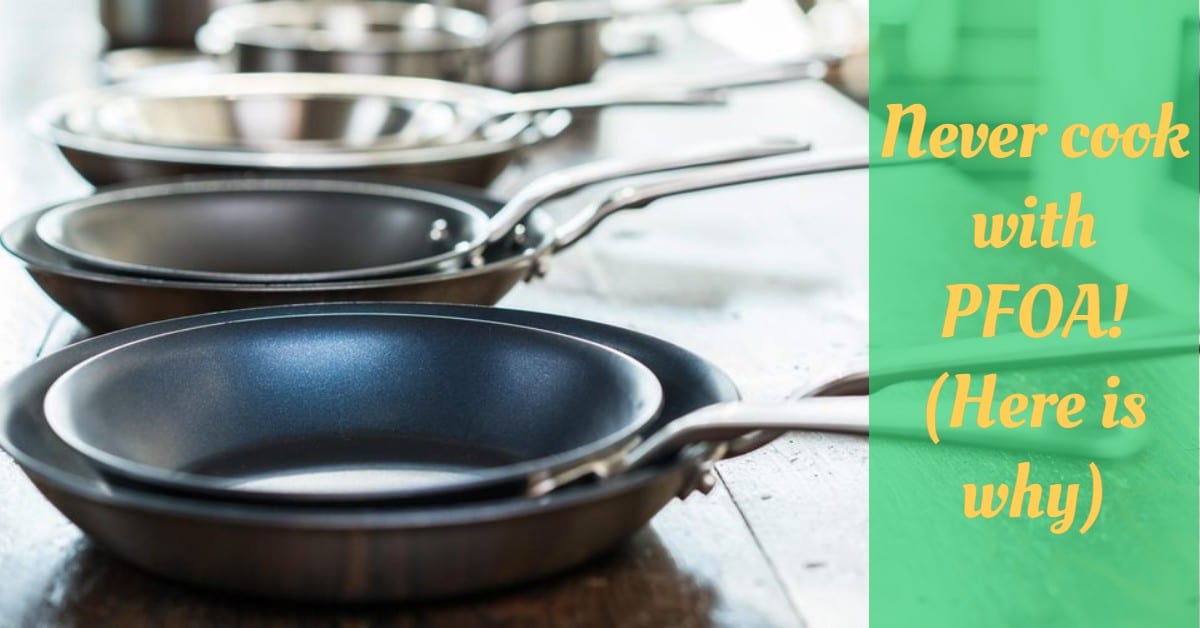 Technical progress is everything. We all love to cook without worries, hassle, and unnecessary actions. From this perspective, the non-stick pan looks like another sophisticated tool created by engineers for people.

Seriously, how many times you got annoyed because the eggs got stuck to a pan just because you left them for a minute later than you should have to? Or when the frying of pancakes is turning into an endless race of trying not to burn them? With the PFOA you will forget about these problems for good and will be enjoying the technologies of the modern world. 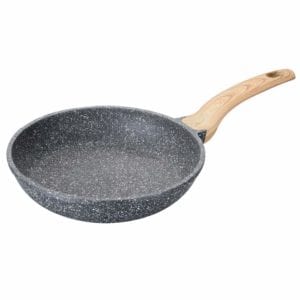 However, the progress in one sphere is accompanied by the regress in another. It turns out the PFOA is not that safe for our health. The materials that they are made of can cause serious harm to our well-being. There’s been a lot of concern lately about the coatings of non-stick pans, such as Teflon pans and other non-stick brands.

The problem is PFOA and PTFE, the chemicals that are used in the manufacturing process of non-stick cookware. For those who would like to get more information and be aware of all the damage that the usage of the non-stick pan can bring, there is more information can be found in this article.

So, what is actually PTFE and why is it so bad?

PTFE stands for “polytetrafluoroethylene”, a fluoropolymer plastic compound that is silicone-based and contains both carbon and fluorine.

Each molecule of the substance will have two carbon atoms and four fluorine atoms when it comes to the chemical breakdown of PTFE  – this duo is what makes up that substance that is sprayed on pans to make the surface non-stick.

This element was first discovered by the scientist named Roy Plunkett in 1938. Ten years later, PTFE was branded as Teflon, along with getting well-known all around the world from all those non-stick properties in cookware. 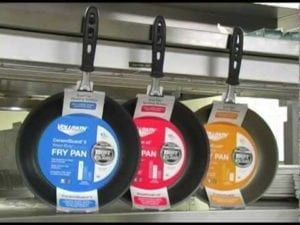 But the cookware is not the only industry where PTFE is used. It’s also used in industrial manufacturing because of its durability and strength. Lots of products that we have today on the market, including electronics, automobiles, and aerospace high-tech products, are made with the usage of this element.

Another harmful element – PFOA – stands for “perfluorooctanoic acid”, which is a man-made synthetic compound that is used not exclusively in the non-stick cookware production but also in making stain-resistant fabrics and kitchen mats as well.

A curious fact to know is that the PFOA element is also used in the process of making PTFE. But their chemical structure is different. There are several concerns about the PFOA element, and there are definitely reasons for that. First of all, this element stays in the human body, as well as in the environment, for significant periods of time.

There have been many studies of the PFOA, to figure out how safe it actually is, and the final results have shown that this chemical element is present in very minute levels in people all around the world. For those people living near water where the water supply has been PFOA contaminated, the levels are even higher.

If even those people who just live nearby the water sources, contaminated with those chemicals, can you imagine those, who actually work at the plants, producing PFOA? Further health studies on it indicate that people who have been exposed to the chemical are more at risk for the following health concerns:

Of course, this is not the full list of diseases that can be caused by PFOA. The full information still continues to be received in the near future years. 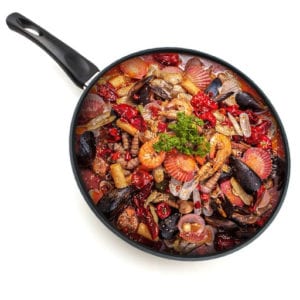 So how are we actually affected by PFOA from the cookware?

Well, when the non-stick pans are made, this element is used and the exposure to humans is low. However, the main risk that all the harm is collectible and will be seen through the time.

When we cook with a non-stick pan, logically its surface is getting warmed, which releases all the dangerous toxins and other emissions from the heating of PFOA (the coating contains this material) are vaporizing in the air and then the person cooking breathes them in, or, even worse, they soak into the meal cooked which later is being consumed by all family members.

Luckily, manufacturers have stopped using it in non-stick cookware due to its carcinogenic properties. What is more, there is even more cheerful news. Now the non-stick cookware without containing the PFOA is invented. In fact, in the US and Canada, all cookware that is sold since 2015 is PFOA free.

Let’s move on to another component, PTFE. Unlike PFOA and PTFO, PTFE is not considered to be a health risk, however, there is also no evidence that it is fully harmless for the humans’ health. Numerous attempts of research have been done and it was figured out that that PTFE isn’t toxic and that’s it’s safe for human consumption.

But hold on from using all the cookware that contains this element as well. There is no research completed which would show that PTFE is fully safe when it is stored in the cookware materials. 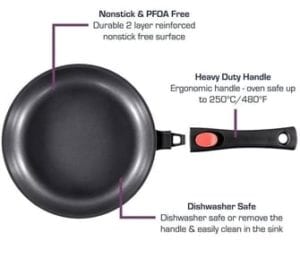 The first concern with PTFE is that it can break down when it gets too hot. It has a melting point of about 600F but even at lower temperatures of about 450 to 500F, it starts to break down. When it’s getting released, the fumes that it leaves are not that safe to breathe in.

It is especially important to remember about the cooking fumes since they are produced through the high temperatures when any vaporizing or fumes are not recommended to be inhaled. So it’s debatable whether breathing in PTFE fumes is more dangerous than breathing in any other substance.

On the other hand, until all the studies have demonstrated neither its safety nor its harm, it is better to avoid all the non-stick cookware containing PTFE.

Still, the risk is there, and it’s recommended that non-stick cookware that’s made with PTFE not be heated past the 400F mark. Apart from that, it is not recommended to leave the empty pan on the heating stove or in the oven where it can get heated up quickly and start emitting chemicals.

Moreover, PTFE still somehow deals with those peril connected with the cooking with PFOA. And yes, PFOA is used in the process of PTFE production. It is not necessary, that all of this toxic substance is used up and present by the time the production process for PTFE is complete. There are only some minor particles. 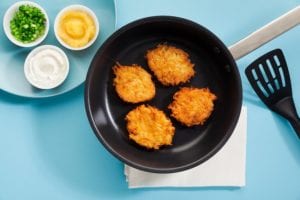 Are there actually good non-stick pans?

Actually, yes. The thing is, everything, in this case, is depending on the coating. The number of layers is also crucial and how qualitative and thick each layer is. There are some good and affordable non-stick pans on the market that should have at least 3 layers.

One more essential point that the pans which have the PTFE sprayed on their surface are more durable than those which were made by rolling.

Are the pans without PFOA durable?

Even though some people also doubt this factor, but all the non-stick pans without PFOA are as durable as they used to be with this element. Actually, the thickness of the pan plays a crucial role in how durable the item is. Thicker pans are able to distribute heat more efficiently and at the same time protect the PTFE coating on the surface.

Also, the material which is sprayed over the surface of the pan will determine its durability. Usually, the aluminum pans have the PFOA free coating and promise to serve you a long life. Moreover, stainless steel cookware has the same PTFE coating.

All the factors mentioned above don’t abolish the fact that non-stick cookware does make your life much easier. Many chefs all around the world are using this type of cookware to quickly prepare the delicious meal. It’s true, with this non-stick pans you can make any food in a few minutes, from eggs to fish, to crepes.

The essential benefit of this cookware is that you are using almost no fat or the smallest amount of it. The clean-up is much easier because the food doesn’t stick to the surface of the pan. Next time when you go shopping for the non-stick cookware, look for the items covered with copper, aluminum, and stainless steel.

Ceramic cookware is a great alternative to the PTFE. Also, such materials as carbon steel and cast iron can be found easily. The thing to remember when cooking with either of these pans is that they need to be seasoned properly not only before using them but also every few weeks.